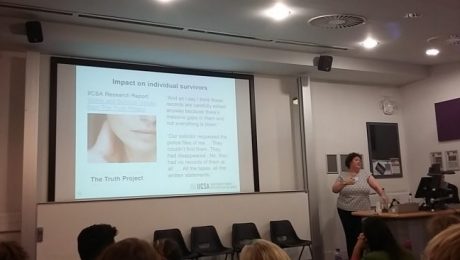 MIRRA stands for “Memory, Identity, Rights in Records, Access”, and has been conducting research into the process of Care Leavers applying for records, sometimes later in life. Today at the University College London was a symposium and conference, at which many fascinating speakers gave presentations.

After an introduction by Professor Elizabeth Shepherd, the opening address was given by Keynote Speaker Elizabeth Denham CBE, the UK Information Commissioner, who emphasised the role of the Information Commissioner’s Office in relation to record keeping, and preservation of personal data. She is the visiting Professor to the UCL where the conference was held. She explained that her history stems from being an archivist in Canada dealing with children from Residential Schools in British Columbia.

After coffee, various contributors to the project gave heart felt speeches about their experiences of applying for their records as care leavers. Victoria Hoyle over-viewed the project and what had been discovered from the research. Quotes from those who had gained access to their records were displayed on screen. The rawness of the various addresses from care leavers were very powerful, amusing, and passionate in equal measure. We also learned from academics and records officers about the practical process of the research and what lessons can be learned.

Victoria also played a very inspiring short film consisting of short quotes from the participants to the project and the research. It highlighted the major points such as how long and irksome the experience of applying for records was for care leavers, how it could be improved. Below you can replay the film.

After lunch we heard from campaigners, and researchers from the UK, Australia, and New Zealand who discussed the role of records in gaining justice for victims and survivors of abuse and neglect. Justine Rainbow from IICSA (Independent Inquiry into Child Sexual Abuse) gave us a summary of the experience of the lack of records in many of the modules currently being conducted as well as the experiences of those giving evidence to the Truth Project. Time and time again the institutions had destroyed useful evidence which IICSA would have liked to examine in order to prove the veracity of none recent allegations

Finally we heard about how a caring approach to records and record keeping could assist care leavers. Representatives from professional bodies, voluntary organisations and service providers talked about what they are doing to support care-experienced people’s rights to records. In particular we heard from the Darren Coyne of the Access to Records Campaign Group, who explained what legislation they are lobbying for to help care leavers over 25 who are looking for records. The Archives and Records Association fielded questions, The representative from British Association of Social Workers explained the desire to help by practitioners but the effect that austerity has upon the wish for improvements and developement. A representative of Family Action outlined a project to set up a website Family Connect in conjunction with Julia Feast, the purpose of which is to help put people in touch with their family from whom they have lost contact. We also heard from the Rees Foundation.